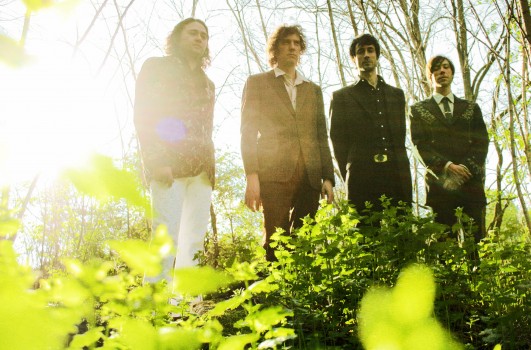 Internal Sounds, the anticipated new album from The Sadies, will be released Sept. 17. In advance of the release, the new song “Another Tomorrow Again,” which American Songwriter describes as “…the perfect teaser for the album,” can be heard here via americansongwriter.com and in the player below.

Of the experience, Dallas comments, “There was a conscious effort to deliver a finished product that wouldn’t suffer from a deadline or budget. We recorded this record over a span of a year, in session for 20-plus days. By the end, we’d spent every dime we had and used up every favor. There is usually a sense of immediacy to our records, maybe because we make a lot of them. I didn’t want that this time.”

Formed in Toronto in 1994, the band has released 16 studio albums, including 2010’s Darker Circles, which the A.V. Club describes as, “…full of strong melodies, beautiful guitars, and the ghosts of a unsettled past” and which Under The Radar praises as, “…twangingly irresistible guitar interplay.” Additional recordings include Precious Moments (1998), Pure Diamond Gold (1999), Tremendous Efforts (2001), Stories Often Told (2002), Favourite Colours (2004), In Concert Volume One (2006), Tales of the Rat Fink (2006) and New Seasons (2007). They have also released two albums with Andre Williams (1999’s Red Dirt and 2012’s Night and Day), an album with Jon Langford (2003’s Mayors of the Moon), an album with Neko Case (2004’s The Tigers Have Spoken) and an album with John Doe (2009’s Country Club). Country Club went on to chart on Billboard’s U.S. Country and Indie charts and reached #10 on the U.S. Heatseekers chart.

Internal Sounds tracklist:
1. The First 5 Minutes
3. The Very Beginning
4. Starting All Over Again
5. The Very Ending
6. Another Tomorrow Again
7. Another Yesterday Again
8. Leave This World Behind
2. So Much Blood
9. The Lesser Key
10. STORY 19
11. We Are Circling