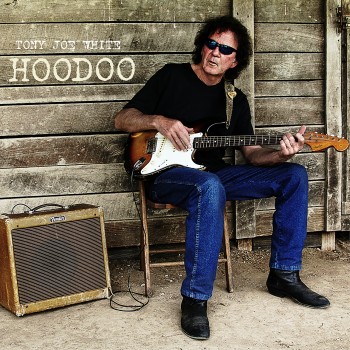 The latest album from the legendary Tony Joe White, Hoodoo, is now up for pre-order at the Yep Roc Store.  Get a taste of the new record in the player below.

Awash in danger, spiritual uncertainty, and environmental fury, Hoodoo’s lyrical concerns are matched by a particularly intense strain of White’s trademark swamp funk.  Hence the title’s double-edged meaning: “hoodoo” referring both to the songs’ ominous tone and the palpable vibe that filled the studio as the songs were cut. “Our studio is an old antebellum house,” White says, describing his Church Street Studio in Franklin, Tennessee. “I hear it was used early in the Civil War days as a doctor’s office. Wood floor, lotta wood everywhere—good for the acoustics.”

Cut mostly live to tape—vocals and all—much of Hoodoo consists of first takes. “There’s some actual magic that came over all of us when we were doing this,” White recalls. “I would sit down with my drummer Cadillac [Bryan Owings] and my bass player the Troll [Steve Forrest], play twenty seconds of the tune, and then say ‘We’re gonna hit record, and you just play what comes into your heart.’ It’s like everyone is getting the hoodoo sensation. Spontaneity is beautiful. And,” he adds, “since it’s our studio, there’s no hurry: no one is over our shoulder saying when we gotta get in and when we gotta get out…we were the record company.”

Culled from an initial stack of seventeen or eighteen tunes, the nine songs that comprise Hoodoo come alive in the haunting atmosphere and intensity of the stripped-down recording process. Whether writing alone or with collaborators (including his wife Leann, who has been composing songs with and for her husband for over four decades), White gives the listener just enough to fire the imagination while leaving some elements tantalizingly unsaid. “Sometimes, he says slyly, “I like to let people figure out what happens next.”

Despite his illustrious past, White feels no pressure to top himself. “There’s not a push nowhere,” he concludes. “Maybe I’ll stop playing shows and making records when the songs quit coming to me. But they still come to me. You see, I don’t work for a song—but once I get a hold of it I don’t let go. I just keep writing, and when I do, I want to go out and play it for somebody. It’s the songwriting that keeps me going.”