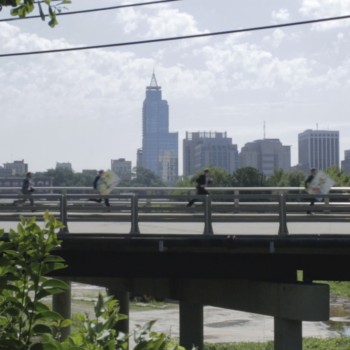 Written last year by lead singer Dave Wilson after the Bluegrass Ramble’s inaugural night, “Living in Raleigh Now” is a heartfelt testimony to the beautiful music brought to town by the IBMA and will remain there until 2018. The band shot an official video for the song on the same streets where it was first performed to celebrate the events return September 30 – October 4, 2014. The song will be available for digital download Sept. 23 and in a special run of 500 cassettes, available during the band’s IBMA performances.

The band also partnered with Yep Roc Records, visitRaleigh.com, The Bluegrass Situation, Hampton Inn Downtown Raleigh and the IBMA to give away a trip to this year’s World of Bluegrass festival. One lucky ‘grass fan and a guest will join the band in Raleigh for the early October festivities – including travel, accommodations and VIP tickets. Enter now through Sept. 8.