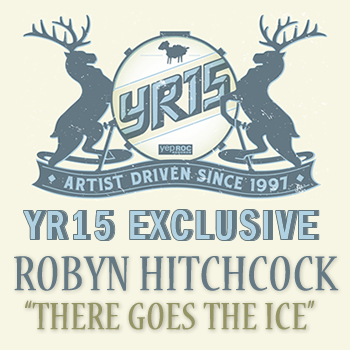 Every month leading up to YR15 festivities, Yep Roc will make one previously unreleased track from our roster available for free. This month’s spotlight is on the new Robyn Hitchcock song and video for “There Goes The Ice” — featuring KT Tunstall and written on an expedition to the North Pole.

Here’s what Robyn had to say about recording the song and the making of the video.

“‘There Goes The Ice’ was written in October 2008 off the coast of Greenland on board the Grigor Mikheev, the Russian ship chartered by Cape Farewell to take a collection of artists and scientists up to Disko Bay where we visited a region of the imperilled Arctic. The photographer Chris Wainwright, had just filmed me spelling out Here Comes The Sun in semaphore, silhouetted on deck against the sunset. Surrounded as we were by icebergs ‘calved’ from the rapidly melting Arctic ice-cap, I found myself writing There Goes The Ice as a mournful echo of George Harrison’s song.

I took the song fresh to KT Tunstall and her husband Luke Bullen in the cabin next door: KT obligingly sang harmony and Luke recorded us. Back in England the following June, Luke recorded KT and I performing this version, in their tent. KT also plays guitar on this and appears here courtesy of EMI/Virgin records.

The video for TGTI is the third in our Groove Egg production series, shot by Matt Wainwright on our kitchen table. The concept was by Hannah Bird, with Michèle Noach and I also contributing. Matt overlaid our footage on some that he had taken of KT and I performing the song. We were all on the Grigor Mikheev together and, to quote Andre, the second mate, ‘You have not seen what I have seen.‘”

DOWNLOAD the MP3’s of “There Goes The Ice” and the additional track “Twitch for Sam Surfer” now for free.